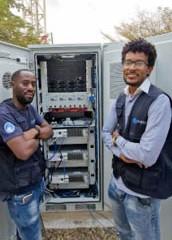 MEGMAR International provides infrastructure solutions to the telecommunications industry. The company engages with tower operators to enable the creation of new towers in half the industry standard time, while complying with the industry’s evolving demands.

Redefining efficiency for hybrid solutions
Hybrid power systems for cell towers are essential for delivering high SLAs for mobile connectivity in geographies with poor grid infrastructure. A typical set up for hybrid systems relies on pre-programmed rules to switch between grid, solar, battery and on-site diesel according to a set of predetermined criteria.

While this approach delivers some improvements in power efficiency, reducing operating costs and cutting greenhouse gas (GHG) emissions, the programming is static and results in under-utilised power assets. Additionally, while equipped with some level of basic monitoring capabilities, the huge amount of operational data generated is too unmanageable to offer any actionable insight for optimisations for tower operations at scale.

MEGMAR – PowerX approach is a game-changer
MEGMAR’s first application oft he PowerX platform ist he rollout of 100 power systems for tower operator Anglobal in Angola, to ensure most efficient operations of the power systems deployed with the lowest CO2 emissions from day one.

“The incredible, mind-blowing thing about deploying PowerX is that it’s like having an accountant standing at the tower site, along with an operations manager, a technical guy, a sustainability consultant, a cell provider customer service rep and a data analyst all making decisions together to have this one little site in the middle of nowhere operating at the cheapest, most efficient, most environmentally friendly level possible,” said Andre Herbst, CEO, MEGMAR.

Anglobal has a network operation center with multiple ways of investigating tower performance. “They’ve got one screen that monitors generators,” said Herbst. “Then another that watches the power system, another for CCTV, another for grid power. The list goes on. What the PowerX platform does is bring everything together on a single dashboard - not only consolidating operations under one system but then using artificial intelligence to have all these components working together at a level impossible using manual processes.”

Minimizing power consumption at tower sites is the priority goal of employing the PowerX platform. Whilst hybrid systems reduce power consumption by switching between grid, diesel, solar and battery power sources using pre-programmed rules, the PowerX system learns the behavior of each individual tower and adjusts its performance in real-time using on-site analytics.

“Take one aspect of a tower’s operation - the number of people connected to the tower,” said Herbst. “The more devices connected, the greater the power draw. PowerX’s AI might look at that tower’s operation and learn that on specific days power consumption is less than the rest of the week. So, the artificial intelligence will automatically be able to adjust the settings of the Hybrid power system to reduce fuel usage on that site. It doesn’t sound much for a single tower, but when you multiply that by the 12,000 towers in a network, the reduction in fuel costs and CO2 emissions are astronomic.”

The ability to remotely control aspects of a tower’s operation, especially in developing regions, was a major draw for MEGMAR.

“You may be sending a field operations team to a tower every month or so,” said Herbst. “First, when they get there, they’re not going to be able to see the inefficiencies hidden in the data that this tower produces. There’s no way any technician can do that in the short time they have on site. Secondly, you have to physically get your team to the site. You need a big 4x4 that’s going to take a day and half to reach the location in some areas, over hard territory that may be in a conflict zone. That’s time, mileage, fuel costs, wear and tear. It’s expensive, inefficient and occasionally dangerous. Having these inefficiencies identified, and most importantly addressed immediately and automatically by PowerX on-site, means significant reductions in manpower, fuel costs, CO2 emissions, and technician risk.”

But it’s not just operations teams who will soon reap the benefit of PowerX’s AI in Angola. PowerX’s auditing and reporting functions give CFOs unparalleled insight into the long-term function of their network, creating accurate usage statistics for tenant billing and enabling better planning for capital expenditure over the tower’s lifetime.

“The worst thing you can do to a CFO is walk into their office and say: ‘Hey, I need $2 million to replace batteries next month.’ That kind of financial instability and unpredictability makes the CFO’s life very difficult. With the PowerX analytics however, we can look at the battery performance over its lifecycle and determine months in advance when it’s going to need replacing. That’s a happy CFO, because they’re seeing more predictability in both revenue and capital expenditure,” said Herbst.

MEGMAR’s mission isn’t simply helping clients reduce costs, inefficiencies and emissions. The big picture is connecting the people of Africa to each other and to the wider world.

“For example, mobile internet has a profound impact on children’s lives, and their future prospects. The world is facing many crises at the moment, and we can give children the online education and tools they need to tackle these problems themselves in the future. That’s not just life-changing, it’s world-changing. The PowerX platform is going to be a major contributor to getting these towers installed and operating dependably and effectively,” said Herbst.