Utilities & mining
The best medicine for the worst off patients 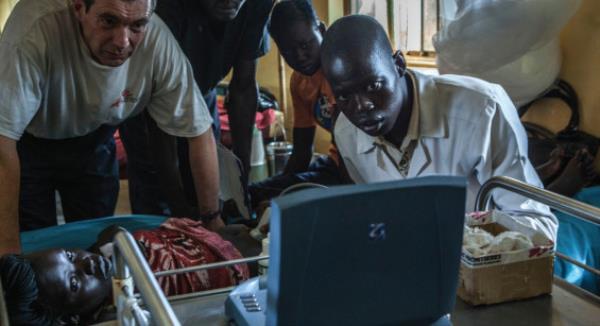 Daniel Martínez, a coordinator of the Médecins Sans Frontières (MSF) telemedicine service, receives an alert on his mobile phone. The organisation’s team in South Kivu, Democratic Republic of Congo (DRC), has a question about a paediatric case – a fiveday old baby with suspected tetanus.

The question is immediately forwarded to the system’s near 350 experts from more than 30 medical specialties around the world who answer cases requiring expert opinion very swiftly. That’s a typical day for the MSF (known in the Anglophone world as Doctors Without Borders) telemedicine operation carried out in Africa and in more than 72 countries worldwide.

Telemedicine allows remote medical teams to consult with a network of experts whenever they are confronted with cases outside their area of expertise.

Nearly a decade on from its launch in 2010, the store-and-forward telemedicine services (where questions are submitted via secured online platforms) is being used by medical practitioners has not stopped growing. Now it’s invaluable.

However, it’s not as straightforward as it sounds. Scaling new technology is often tricky, but when your raison d’être is urgent crisis response in resource-poor locations, the pressure to react and deliver can be immense. For that reason alone, clear communication is vital.

For the service to be functional 24/7, coordinators work with their counterparts across the globe to diagnose and treat patients as soon as possible. On average, the coordinator takes less than 10 minutes to forward the query coming from any MSF project to the expert. The response time from specialists largely varies depending on the nature of the case. However, some urgent cases are closely followed up by coordinators and the response from a specialist can arrive within one or two hours. For rest of the cases, depending upon the nature and number of specialists involved, the response time five to 24 hours.

In some cases they are followed up for days or even months with input from multiple specialists. “I was so impressed with both the quality and accuracy of the answers that I couldn’t stop using it,” says Kay Hodgetts, an Australian doctor, who worked for a few weeks in an emergency intervention to assist displaced people and victims of violence in Leer, South Sudan.

She recalls her first assignment with MSF in Ethiopia. A four-year-old was one of the patients she treated with the support of telemedicine. “It was a particularly complicated case: the child was malnourished, had fever and pancytopenia (a reduction of red cells, white cells and platelets in the blood that is usually related to diseases that affect bone marrow), and was not responding to multiple lines of treatment,” she says. Kay and the medical team , used the telemedicine service and sent the patient case history, details of how they had treated him, photos, a video and the results of a blood test. After weeks of treatment, the patient was finally discharged.

“Currently, increasing widespread internet access in MSF projects helps bridge the gap between the level of care in the field and in large medical centres,” says Kay. “In fact, it makes even more sense that we use telemedicine in these contexts because we have fewer diagnostic tools.”

many of the countries where MSF operates are plagued by conflict or with dysfunctional health systems. The upshot is a lack of health workers and hardly any medical specialists outside the referral hospitals. For example, a number of patients in the system are children under five and so demand for paediatricians often outweighs supply.

The referral hospital in the district of Madaoua, southern Niger, is taking steps to address this. Every year, Niger faces the same problem – a peak in malaria and malnutrition from May until September, when the number of paediatric beds triples to 300. Doctors at the hospital send their queries via the telemedicine platform and then, every Thursday, they connect with a Canadian and British paediatrician based in Gambia to discuss the most complicated cases in depth with MSF specialists via video-conference.

Treating diseases is one thing, but treating serious wounds brings its own pressures. “We need to know whether plastic or orthopaedic surgery will be possible or if the best option is to amputate the hand.” That’s the desperate message an MSF team in the DRC received shortly after sending a photo of an eight year-old patient with a horrific hand and wrist wound.

The response came fast: “Don’t amputate. Children’s capacity for recovery and adaptation is tremendous. So just check the infection, try to close or graft the wound, and put the wrist in the correct position with a sling. Keep me informed.”

According to 2017 figures from MSF, enquiries about surgery represent more than 10 per cent of the total received by the telemedicine service, so doctors on the ground can receive very specialised opinion for their cases, often faster than in the developed world. Paediatrics then radiology are two major specialities that account for number of cases on telemedicine platform.

The range of cases are diverse: radiology, dermatology, burn and wound care, snake bites, critical care, surgery, mental health, cardiology, nephrology, obstetrics and gynaecology. Dr. Joanne Liu, a Canadian physician who currently serves as MSF’s international president, was instrumental in developing MSF’s use of telemedicine after realising the critical support it can provide to the organization’s doctors in the field. “Suddenly you’re not all by yourself in the middle of South Sudan or Congo,” she says. “Telemedicine can make a huge difference.”