A tall order
With more than 39,000 communications towers spread across three regions and 11 countries, IHS Towers has its hands busy with the monumental task of monitoring each and every one. Each of IHS Towers’ 2,217 towers in Cameroon must be regularly checked to evaluate antenna positions, faults and broken equipment.

Traditional methods see qualified specialists climb to the top of each tower – measuring as high as 300m - to take photos and make observations, which are then compiled into a report. The inspector risks serious injury and even death should they fall from such a height. Moreover, inspections can be time consuming, expensive, and provide only low quality or incomplete data.
SkyVue proves drones a boon for tower inspection

SkyVue trialled a project in 2020 to improve the inspection process of the IHS Cameroon towers.
The company performed a standard tower inspection using drones and created an intelligent 3D digital twin of the tower. The tower could be made available virtually for IHS Towers teams to use for their planning, including making measurements, new installations, or to explain engineering work.

By leveraging PIX4Dscan and PIX4Dinspect, SkyVue successfully inspected a tower in Douala, Cameroon, without utilising expensive equipment, and without sending an inspector to climb up it. The inspection took just one hour instead of a whole day.

Using PIX4Dscan, the image capture was automated by the tower flight plan within an iOS app, drastically reducing the time demands of both planning and taking the high-resolution photos. The cloud based PIX4Dinspect used automatic machine learning algorithms to process the data rapidly, measuring antennas to help identify them in combination with the pictures taken in an underneath orbit, which show the coaxial port entries underneath the antennas. This new, more time-efficient and accurate workflow means that multiple towers can now be inspected within a single day. The SkyVue team could then add their own notes to different elements of the tower directly from their browser.

“The accurate 3D model of the tower generated was exactly what SkyVue wanted: an intelligent digital twin, which displays automatically the height of the antenna and its angles (azimuth, downtilt and plumb),” said Raoul Fossi, CEO of SkyVue Solutions.

Risk-free tower inspection
SkyVue completed the tower inspection in a fraction of the time compared with traditional methods and managed to cut inspection costs by one third. The combined capture and process workflow of PIX4Dscan and PIX4Dinspect were, according to SkyVue: “a game changer for the inspection world because they are custom designed to address an industry specific pain point.”

SkyVue highlighted the auto-generated inspection reports, automatic antenna detection, pre-planned tower flight mission in app, and generation of comprehensive reports as key features valuable for the project. However, the greatest win was the removal of the risk factors associated with tower inspections.

“This project was special to us because it made people safer. By performing tower inspections with drones, we cut completely the need for humans to climb on towers for inspections,” said Fossi.

IHS Cameroon is reportedly now in talks to roll the solution out nationwide, in a major technological advancement for the communications tower sector. 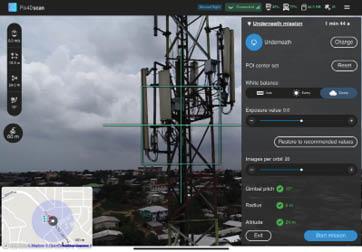 “We are excited to see the developments of using drones for telecom inspections. It is an ever-changing industry,” said Pablo Santos, business strategy Manager, Pix4D. “Since this project was completed, we have added various AI algorithms such as automatic rust detection that streamline the overall process of drone inspections and result in intelligent digital twins.”

The original story was published on pix4d.com