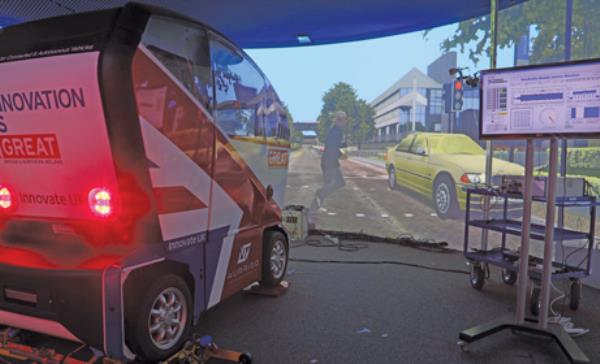 High-speed comms will enable autonomous vehicles to quickly share masses of data with each other as well as traffic management systems.

Working in the 28GHz millimetre wave (mmW)band, they are said to have hit 2.867Gbps in over-the-air transmissions.

According to the team, that’s nearly 40 times faster than current fixed line broadband speeds and equivalent to sending a detailed satellite navigation map of the UK within a single second, or an HD film in less than 10 seconds.

As well as being used to deliver high-definition content to in-car entertainment systems, the system will allow autonomous vehicles to rapidly share large quantities of data with each other and with traffic management systems.

This will include precise 3D road maps created by LiDaR (a type of radar system that uses laser light instead of radio waves), HD video images of the vehicle’s surroundings, and traffic information.

The team optimised antenna placement both inside the pod, and on roadside infrastructure, such as a traffic light.

Researchers say their controlled trials are critical to better understanding the capabilities of 5G in mmW bands, and how infrastructure providers and vehicle manufacturers must carefully plan and deploy their 5G service and application rollout over the next few years.

An autonomous vehicle categorised as either Level 4 or 5 does not need a human driver and is fully responsible for all driving and safety responses.

Level 4 vehicles are usually speed restricted to 25 mph, or only driven in specific test locations.